Today I have been playing around in Houdini trying to put stuff together that I have learnt and mixing it with some experimentation.' The first part of the day I watched some basics of Houdini tutorials to try and learn how the rendering works. I learnt that Houdini has a render region that is similar to the Arnold render view in Maya where it updates with real time changes. One of the experiments I tried to play with was simply trying to mix two color nodes or to create a ra
Chunny Baker

So after a little bit of time of not looking at the flour sack animation thinking it was done and dusted for the time being. I sent the animation to one of my previous teachers who likes to be informed and updated on current work. This teacher pointed out some small flaws and feedback for the animation. So i had another look at the animation and I can see pretty clearly now that it has been pointed out. The center of mass of the character suffers from a period of inactivity. 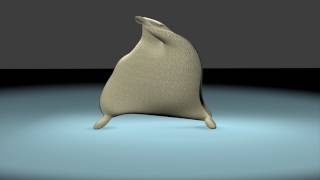 Have narrowed down the possible rigs to use for animation practice for my personal projects. As mentioned earlier I found a nice rigger from Vietnam who creates a variety of rigs from bipedal game characters to a assorted mix of different quad and swimming type creatures. I will be breaking up the animation projects into three different mini projects to get some quick practice at different moments. The first project will be using a 3D version of the classic Disney flour Sack.
Chunny Baker

Over the last week have been looking at alot of different rigs from different sournces such as highend3d 11 second club, anmation buffet. The many free rigs range from start from bad to overused with some good ones every so often. I found a site called MRigs or Creature Ris. which has some pretty sweet looking creature body shapes but unfortuanly these rigs are not free. But would have been nice to work with these rigs. Going through many rigs I think I am starting to get a
Chunny Baker

So recently have been doing some looking around to try and get a more precise idea of what i would like to explore with personal project Looking further into research topic trying to focus on what to do for project this is what i have come up with so far. Animating with custom rigs. Looking around the web for different rigs that may be less generic or more challenging than bipedal rigs these are the rigs I found. ​ Next part of project want to create a small stylized environm
Chunny Baker

Another term of study at SAE. During studio we have creative freedom to pursue any field of study that we would like to explore. Quite a daunting proposal as there is potentially many things i would like to explore. On a brief reflection of ideas some of the possible routes would like to look into. Animation, Character animation practice working on movements from the mundane to the exciting, playing with body mechanics. Game engine, Familiarising myself with game engine, impo
Chunny Baker

A fruit created as project for class at SAE where we had to concept a idea of a new alien fruit. A research team exploring the new planet Ambiae in the Alpha Draconis system. Have discovered a new bioluminescent underground growing fruit. Distinct visual features of the fruit .the fruit has a translucence purple red tinged outer skin with small brightly multicolored seeds that sit on the top of the fruit underneath the dandelion stalk. A spine shaped root wraps around the out
bottom of page